Zoom the image with the mouse

Names: The Lycoris radiata has many names as you travel across the country. The names don't change the striking beauty of this fall blooming flower. Here in East Texas, we call it "red spider lily". It is red, and the stamens look like spider legs.  Along the coast, it is often referred to as a "hurricane lily" because it often blooms after the first fall hurricane. Many people call this a "naked lady" because it blooms on a naked stalk. Farther north, they tend to call it a "schoolhouse" lily because it is blooming when school has started. Others simply call it a "surprise" lily because it shows up out of nowhere and surprises you one day with a flower. So the question becomes--which one is the right one? We'll let you decide. 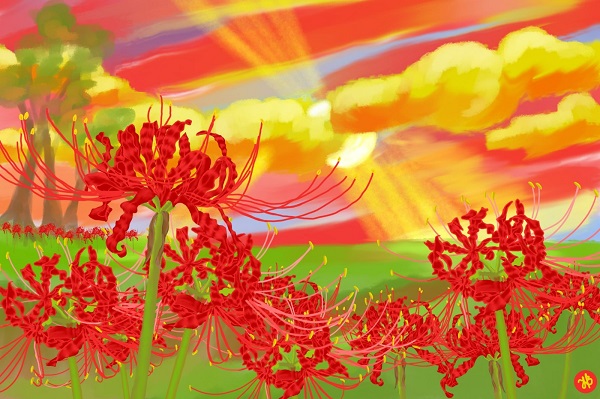 How they bloom: We know that many of you already know that red spider lilies bloom differently than most flowers, but we want to put this here for our new customers. Now is a perfect time to plant red spider lilies. Perennial bulbs often need 6-12 months in the ground before they bloom so you are giving the red spider lilies that full year in the ground before they will pop up with a bloom on a naked stalk next September. Red spider lilies usually take 1-2 years planted before presenting foliage or blooms. Your bulbs are developing a strong root system right now to support future foliage and eventually blooms. You might see the foliage this January-April, but don't be concerned if you don't. Most people still expect to see something growing during the summer months. You won't see anything. These lilies are dormant in the summer. The flowers suddenly appear with the first later summer and early fall rains. One day there is nothing growing and then suddenly you have a surprise, a fully blooming flower! Red Spider lilies act very similarly to yellow spider lilies, schoolhouse lilies, and naked ladies. Simply put, they bloom in the fall and then have foliage for the winter. I have red spider lilies planted almost 2 years ago that have not yet produced blooms but have produced increasing foliage each year. 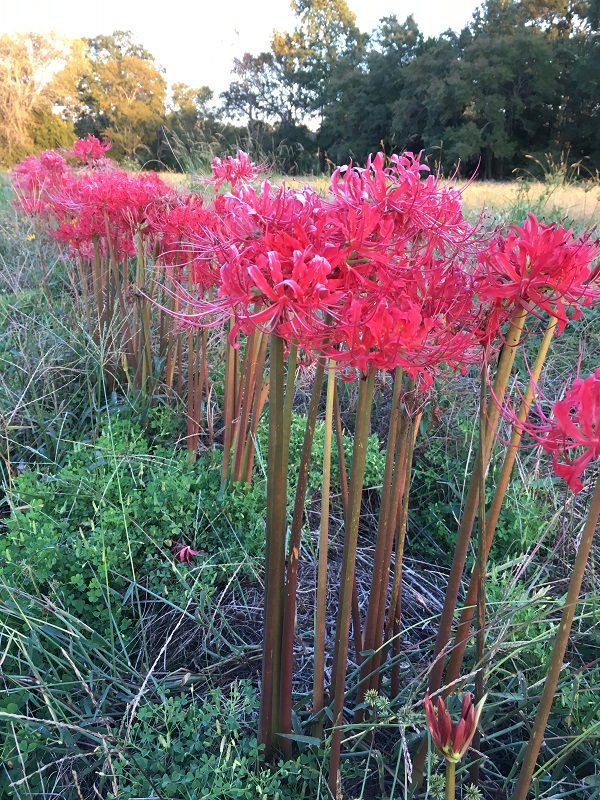 Blooms: They are prone to skip their first-year bloom. This happens often when the bulbs spend too much time out of the ground—this time out of the ground is necessary to ship them.  However, once established in your garden they are there for a lifetime! Some say that the flowers bloom two weeks after the first good fall rain. If there is no rain during the month of September, the bulbs have been known to not bloom altogether. The red spider lily foliage follows the flower, staying green well through the winter and into late spring. Individual blooms aren't softball-sized but blooms together on a stalk are softball-sized. 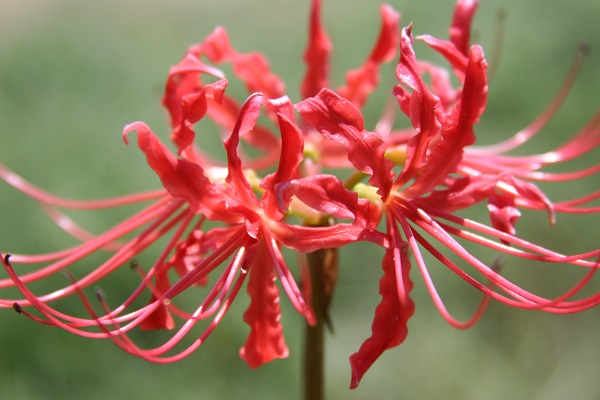 Planting: The single most important thing about landscaping with red spider lilies is the sun. They need at least 1/2 day of WINTER sun. That means about 6-8 hours of sunlight during the winter months. If you look at the photo below, you will see that they are in the shade of the trees. You can be sure that most, if not all, of those trees, will lose their leaves in the winter when the greenery needs sunlight. The red spider lily puts on its foliage during the winter (January-May) and that is when it takes in the nutrients it needs to produce those bright red flowers the following September. The winter foliage soaks up sun energy during winter as it prepares for summer dormancy. The foliage normally completely dies down by around May. 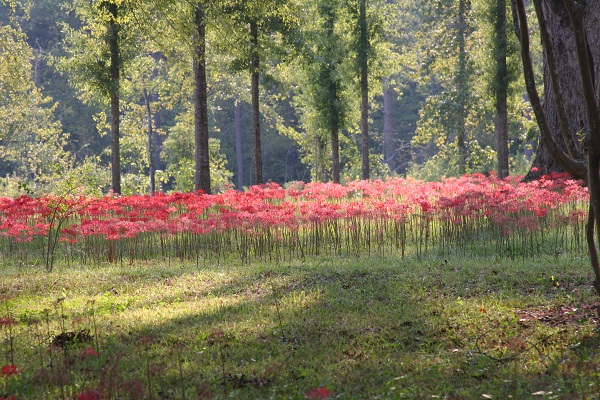 Plant: Don't plant the bulb too deep. You really just need about 2-3" of soil above the bulb. You can plant 2-3 per hole to make the blooms look more natural. Red spider lilies really do well in any type of soil. Red spider lilies thrive in soil that has plenty of organic material mixed in but they do not require fertilizer. Newly planted bulbs would actually be harmed by exposure to fertilizer, so if you are going to apply nutrients, limit the application to established plants when the plants are producing their green leafy foliage during the winter. After planting the bulbs, water the soil thoroughly. Damp soil is ok, as long as the bulbs are in a spot where they will receive plenty of winter sun and the foliage is allowed to die down naturally in the spring. Standing water is not good. Once the summer season starts the red spider lily will do best in soil that dries out a bit, as this facilitates its entry into the dormant stage when its leaves die back. This period is followed by its blooming season when it will reward daily watering with long-lasting blooms. Too much moisture in the soil will lead to the bulbs rotting. 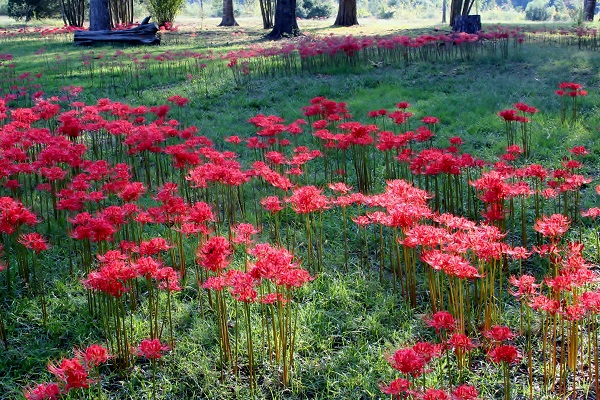 Multiplying and Dividing: The red spider lily multiplies with new bulb offsets quite readily. It also produces more bulbs and larger flowers than its modern counterpart from Japan. The absolute best time to divide the spider lilies is at the beginning of April, when the foliage has absorbed winter and early spring nutrients from the sun and the foliage dies back (turns a yellow-brown). Is this practical though? A much more practical answer on when to dig, divide, and transplant red spider lilies is a familiar answer: when you have time! Yes, you really should not dig them in late fall after they just started to put out roots and grow foliage, but you can if you need to (like if you are moving, or a road expansion project is going to wipe out an old house garden with generations of heirloom flower bulbs). No matter what time you transplant red spider lilies, whether it's the spring or fall, they often skip a year of bloom after being disrupted. 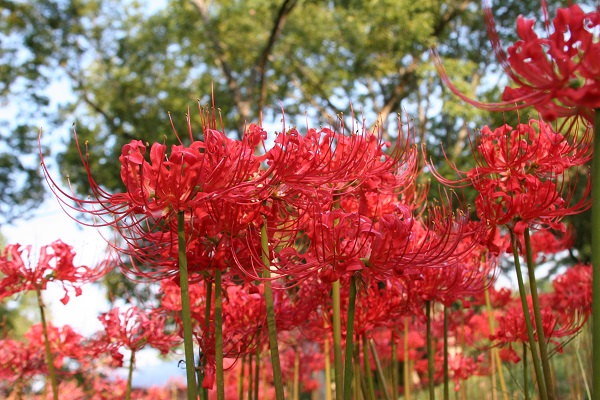 Other perennials to use with red spider lilies: I prefer to use some of the best blooming, toughest perennials to mix into our garden.  At my home if I don’t use the best perennials, we will either kill them because they are not watered while we’re out of town, the kids will walk over them or pick them when they are about to bloom, etc. etc. So, I prefer to use any one of the following:
1)     Salvias: There are many Salvia species that exist. You could choose the large fall blooming Salvia leucantha, an heirloom selection like Salvia ‘Henry Duelberg’, or a modern selection like Salvia x ‘Big Blue.’
2)     Lantanas: the old orange and white selection is great, but also try Lantana ‘Gem Compact Pink Opal’ or some of the trailing lavender or purple varieties.
3)     Plumbago: comes in a beautiful blue or white, although the white seems to be a little harder to keep alive.
4)     Phlox: one of the best summer phlox that takes over in the hottest part of July is the Phlox ‘John Fanick.’  I can think of few better ways to cover dormant red spider lilies than with this amazing phlox. 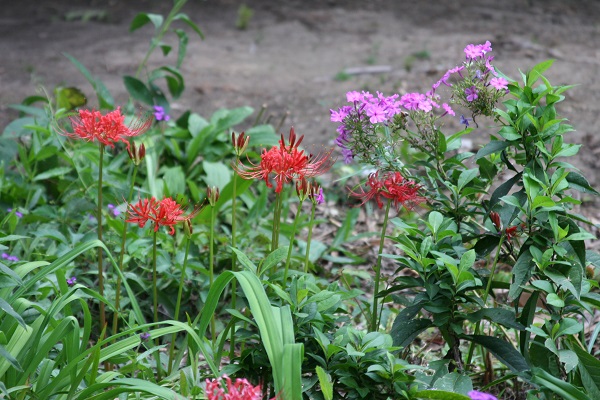 Other Annuals to use with red spider lilies: There are many summer perennials (and annuals for that matter) that can cover your dormant red spider lily bulbs while they rest under the ground, so I am going to focus on cool season or winter annuals. The idea with cool season annuals is to find a companion plant that brings color to your garden when the bulbs are not in bloom.  Personally, I prefer perennials due to budget and time reasons, but I am not opposed to going all in with annuals some years or for special events (like when we hosted a wedding shower one fall):
1)     Alyssum: ‘White Stream’ is a popular selection. It is a cool weather selection that would last in spite of our hot summers.
2)     Snapdragons: play around with many of the colors new varieties offer!  They are just annuals, so have fun experimenting with varieties such as ‘Snapshot Pink’ or ‘Speedy Sonnet Yellow.’
3)     Pansies: I’ll throw Viola (Johnny Jump Up) into the mix as well. They pack a lot of color into a small space and can carry the garden from fall through spring if there aren’t any hard freezes. They come in yellows, pinks, blues, purples, and more. Matrix is a popular selection of pansy.
4)     Cyclamen: the red and white of cyclamen can be stunning. They are very popular in Houston and other climates that don’t normally experience hard freezes.
5)     Paperwhites: I’ve included paperwhites along with the other annuals, because although they can be used as perennials in certain circumstances, in this circumstance you will want to remove them after they bloom. The answer to adding flowers to hide foliage is not MORE foliage for months after they bloom. 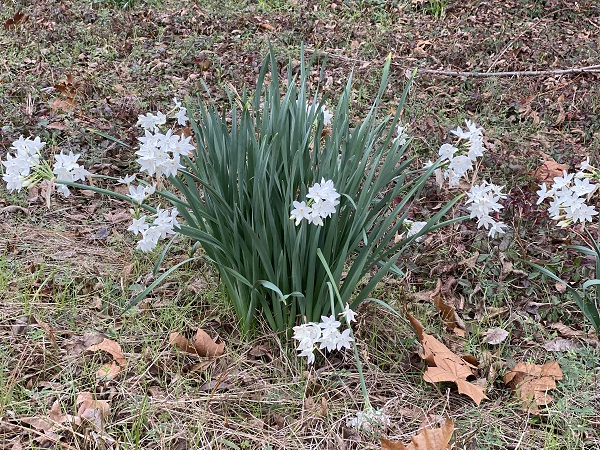 Still more bulbs to use with red spider lilies: There are an assortment of other perennial flower bulbs that go well with spider lilies. These are bulbs that will bloom during other seasons. Other Narcissus which bloom from January to March, as well as bulbs such as white iris, snowflakes, and rain lilies which carry the bulbs from winter through early spring.  Other rain lilies, crinums, and Hymenocallis can then carry the bulb section of your garden through summer, and generally pair well with the other perennials. 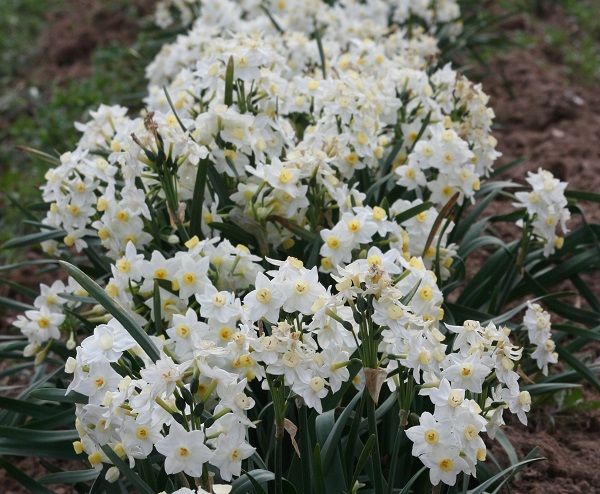 The History of the Red Spider Lily

In 1854 Commodore William Perry opened the ports to Japan aboard some of the U.S. Navy's first steam powered ships while under orders from President Millard Fillmore. Aboard one ship in the fleet was a certain Captain William Roberts, who had a keen eye for horticultural treasures. While in Japan, Captain Roberts acquired three bulbs of a plant with red spidery type blooms. His niece would later described the bulbs as being, "in such a dry condition that they did not show signs of life until the War between the States." These three bulbs survived and eventually thrived in their new North Carolina home before spreading across the Southern U.S. 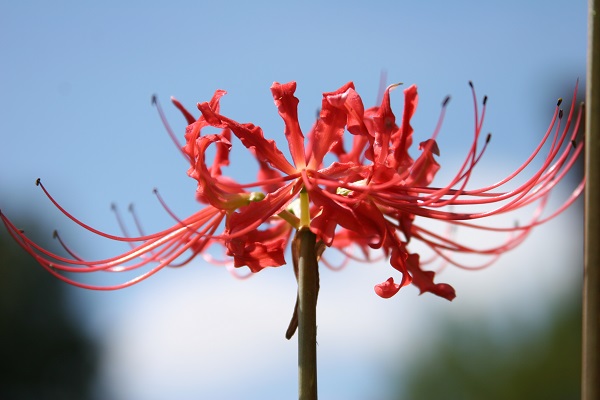 While deer will eat anything, red spider lilies are more resistant to their urges than many other ornamental garden products. They definitely leave the foliage alone, but can be attracted to the bright coral orange/red flowers. Many times they leave them alone, but sometimes they will eat them.  So the answer to this question, is that they are mostly resistant, depending on how hungry the deer are.  Remember, humans ate tulips during times of hunger/famine, yet tulips definitely aren’t on our menu either.

Returns Policy
You may return most new, unopened items within 30 days of delivery for a full refund. We'll also pay the return shipping costs if the return is a result of our error (you received an incorrect or defective item, etc.).

You should expect to receive your refund within four weeks of giving your package to the return shipper, however, in many cases you will receive a refund more quickly. This time period includes the transit time for us to receive your return from the shipper (5 to 10 business days), the time it takes us to process your return once we receive it (3 to 5 business days), and the time it takes your bank to process our refund request (5 to 10 business days).

If you need to return an item, simply login to your account, view the order using the "Complete Orders" link under the My Account menu and click the Return Item(s) button. We'll notify you via e-mail of your refund once we've received and processed the returned item.

Shipping
We ship within the continental United States.

Please also note that the shipping rates for many items we sell are weight-based. The weight of any such item can be found on its detail page. To reflect the policies of the shipping companies we use, all weights will be rounded up to the next full pound.